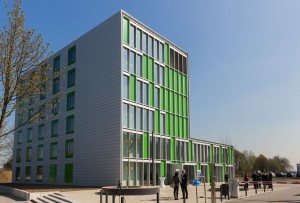 After about two years of construction, the Logistics Campus was officially opened on 22nd April 2013.
With the support of the State of North Rhine-Westphalia, the TU Dortmund University and the “Fraunhofer-Gesellschaft”, the Logistics Campus created an important foundation for the development and strengthening of logistics research in Dortmund. The Logistics Campus will bring together the existing TU Dortmund University logistics professors and also be home to new chairs with endowed professorships. In close connection with the Fraunhofer IML and the University Alliance Metropolitan Ruhr, researchers and scientists want to work together more closely and to step up to increased international visibility.

The main lecture hall seats easily up to 200 people. All technical facilities are available on site. Inside the Logistics Campus, all the comfort for an international conference is available, including a large room for the coffee breaks and buffet lunches as well as internet & Wi-Fi connection at all times. We will also use conference venues at the Fraunhofer IML for hosting the parallel sessions.

The Conference will be held at: 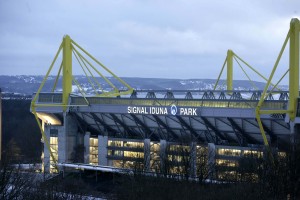 Get an authentic behind-the-scenes view of one of the most beautiful football stadiums in the world. A guided tour will be arranged.

This 54 000 spectator stadium was built for the 1974 World Cup Finals. The football club Borussia Dortmund has extended and improved the stadium three times since. Now, it can be seen as the most exciting Temple of Football in the world. After the last phase of development, according to Bundesliga regulations, the stadium can hold about 81 000 spectators, 25 000 of whom can take their places on Europe’s largest standing terrace. With its additional seating capacity, the venue conforms to FIFA standards. The last great building achievement at the stadium was the construction of the roof pylons.

What all BVB fans already knew for a long time, the respected British newspaper “The Times” confirmed in 2009: Borussia´s stadium, the Signal Iduna Park, is the best and most beautiful football stadium in the world. In their ranking, “The top ten football stadiums”, “The Times” lists Milan´s Giuseppe Meazza stadium on second place ahead of Liverpool´s Anfield ground. 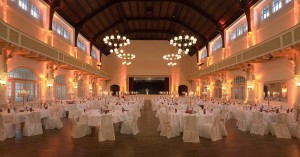 This privately run venue is located on the outskirts of the forest of Schwerte.

Originally built as a little forester’s house in 1843, the magistrate gave his permission to serve alcohol in 1861 which was the first step from the forester’s house to the restaurant it is today. In 1899, when citizens switched from the stagecoach into the tram, the Freischütz became the most popular restaurant. Soon it became too small for that many visitors. From 1900 to 1902 the Freischütz was built in the Art Nouveau style with its listed festival hall as it is known today.

Easily accessible in the Metropole Ruhr Region – at the gates of Dortmund – this location forms the centre of North Rhine-Westphalia. The generous and atmospheric ambience is well suited for conferences, events and dining. The magnificent Art Nouveau style festival hall, the comfortable public room, the well-lit convention and seminar rooms and the prospective pub garden combine tradition with most modern technology, light, creative and regional cuisine and professional service.